Ayodhya: This is the new chapter of Ram Katha in Ramnagari Ayodhya, the 492-year struggle-story has its own ‘Uttarakhand’. While Ramlala waited for five centuries to get his soil, his own courtyard, the ‘Agniksha’ of the devotees is now being completed. Prime Minister Narendra Modi has laid the foundation stone for the construction of a grand Ram temple in Shri Ram Janmabhoomi in Abhijeet Muhurta(12:44:08 PM tp 12:44:40) today. This is only 32 seconds when the Prime Minister will do the Bhoomi Pujan of the Ram Temple at this auspicious moment. PM Narendra Modi led the Bhoomipujan program for the construction of Ram temple.

After this, Prime Minister Narendra Modi worshiped and saw Lord Hanuman’s devotee Hanuman at the Ayodhya Hanumangarhi temple and left for the Bhoomi Pujan site. The Bhoomi Pujan has been started at 12:00PM  for the construction of a grand Ram temple at Abhijit Muhurta.

Prime Minister Narendra Modi will use the shovel and Kanni(Trowel) for the Bhoomi Pujan of the Ram temple. PM Modi will dig the foundation with a shovel in place of the womb house and from Kanni(Trowel) will apply cement on a brick (rock).

Prime Minister Narendra Modi visited Ramlala in Ayodhya Hanumangarhi temple after worshiping Lord Hanuman’s devotee Hanuman. Amidst the Vedic chants, the Prime Minister laid a wreath at the Shri feet of Ramlala. The whole complex resonated with the conch sound. During this, he gave a message of environmental protection by planting the Parijat plant in the campus.

He also did a Parikrama of the temple with Chief Minister Yogi Adityanath. Gaddinshin Shrimanat Premadas of Hanumangarhi welcomed PM Modi with a silver crown and Ramnami.

Inside the venue of the foundation laying ceremony of #RamTemple in #Ayodhya. 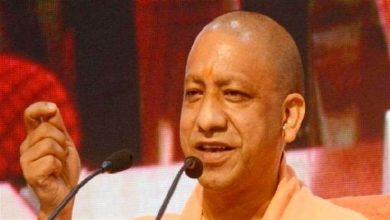