Today is the second day of the three-day ritual for the construction of the Ram temple in Ayodhya. Ramarcha Pooja has taken place at Ram Janmabhoomi on the second day of religious ritual in Ayodhya. 9 Vedacharya of Kashi and Ayodhya got worshiped with mantras. It lasted for six hours. BJP Metropolitan President Abhishek Mishra and his wife were present as Yajaman.

There are four phases of Ramarchan pooja. In 1st phase gods other than Lord Ram will be worshipped. In 2nd phase, Ayodhya will be worshipped along with Lord Ram's generals like Nal, Neel and Sugreev: Satyanarayan Das, a priest (1/2) https://t.co/uyraIeJlBA pic.twitter.com/Uf5K5YYKl7

On the other hand, only a few hours are left in the Bhoomi Pujan of Ram temple in Ayodhya. On 5 August, Prime Minister Narendra Modi will lay the foundation of the Ram temple. All preparations for this occasion have been almost completed. Meanwhile, SPG has taken over security in the city. The city borders are sealed. The entry of outsiders has also been banned till 5 August. It is mandatory for the local people to have an identity card.

Prime Minister Modi will be in Ayodhya for 3 hours on Wednesday. He will perform Bhoomi Pujan on Wednesday at 12:30 pm. It will last for 10 minutes. Modi will stop for 3 hours in Ayodhya tomorrow. The Host will be the son of Ashok Singhal, who is the head of the VHP, the judge of the Bhoomi Pujan program. Ganeshwar Shastri, who took out the Muhurta of Bhumi Pujan, has said that 15 of 16 parts of Abhijeet Muhurta are very pure. Of these, 32 seconds is important.

The Prime Minister will first reach Hanumangarhi on 5 August then he will go to the birthplace campus. There he will plant of Parijat here. More than 48 high-tech cameras have been installed for live coverage of the event. These cameras are from Doordarshan and ANI News Agency. The OB van of the channels has been engaged in Ram Ki Pauri for three days for the Deepotsav and other programs to be held in Ayodhya today. Nikhil Sompura, son of Somapura, the chief architect who designed the Ram temple, said that the temple would have 67 acres of land. But, the temple will be built in 2 acres only. The temple complex will be expanded on the remaining 65acres land.

The proposed model of the #RamTemple, the foundation stone laying ceremony of which will be held in UP's #Ayodhya tomorrow. (Pic Source: Shri Ram Janmbhoomi Teerth Kshetra) pic.twitter.com/UirJeSNYMm 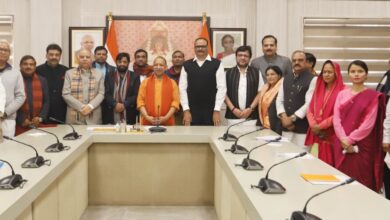