A massive fire broke out at two factories running on the same campus on the National Highway-2 (NH-2) side at Sikandara in Agra on Monday afternoon. One factory is for the manufacture of chemicals and the other is a plastic firm for shoes. When the fire spread rapidly, the police evacuated homes and shops in the five hundred meter area.

20 firefighters, including two from the Air Force, extinguished 90 percent of the fire six hours later by 9 pm. Traffic crawled on the highway for six hours. The factory workers said that they were mixing the chemicals together when the fire broke out. However, police say that the cause will be known only after investigation.

The chemical factory is called Agra Chemical owned by Deepak Manchanda. The shoe factory is named Top Last. This is owned by Deepak’s brother Ravi. The fire first started from the chemical factory and it is reached another factory within 10 minutes. Flames rose 10 meters high while black smoke rose to such a height that ten km away was visible from Rambagh and Keetham.

At four o’clock in the afternoon, the police asked the people of the nearby Durga Colony to evacuate and move away, but the people did not leave. Similarly, the shopkeepers along the highway remained there, but at four and a half hours, the drum of the chemical burst inside the factory and so much panic spread to its voice that the house and shop were empty in five minutes.

The flames and smoke coming out of the factory were caught on the highway by the cameras. Many people came out leaving the car and started making videos from mobile. Due to this, there was a traffic jam at 4:30. Police removed the people making the video, then traffic could open.

SP City Botre Rohan Pramod said that when fire could not be controlled by the fire of Agra’s fire brigade, the fire of the Mathura Refinery and Air Force was called. They arrived at five in the evening, they showered with a foamy chemical. Then the fire could be controlled. The cause of the fire will be known only after investigation. 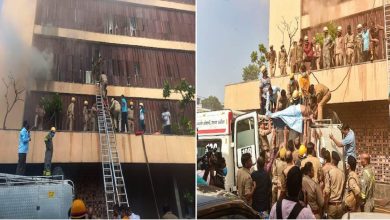